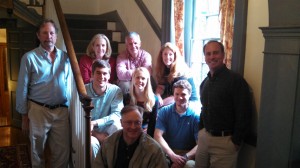 After major storms, the Conowingo Dam on the Susquehanna River is a source of added pollution in the upper Chesapeake Bay. The short-term spike in pollutants after such storms makes for compelling talking points for folks who also maintain that Maryland’s current high taxes and other costs imposed for the Chesapeake Bay’s clean-up are misdirected, misspent, and ultimately, a waste.

One day last fall, I drove eight hours to attend a one-hour meeting at the Chesapeake Bay Foundation in Easton, Maryland, where I learned that this is not exactly true.

Here’s what else I know. My friend Ellen devoted her life to monitoring pollution in the Chesapeake Bay. There came a tragic day when Ellen was collecting water samples, and she inhaled a lungful of Phiesteria toxins fed by excess manure runoff.  Her career caring for her beloved Chesapeake was over. Worse, she was bedridden for months, and after that, disabled. She was working well down in the lower third of the Chesapeake when she was stricken, far from the Conowingo Dam. It was not occasional scouring of Conowingo dam sediment that nearly killed my friend Ellen. It was the daily infusion of pollutants from inadequate septic systems, and large and small scale animal farming seeping into every tributary, and from every shoreline in the Chesapeake Bay watershed, including those throughout Maryland.

Focusing on the Conowingo Dam as the real problem, the only problem, keeps the Maryland tax conversation kindergarten simple, where many would like it to stay. It is argued that Maryland’s high taxes are not business-friendly. I would suggest a different point of view: for too long, Maryland, and the Chesapeake was actually business-vulnerable, where low taxes and lax or poorly enforced regulations allowed large and small polluters a much freer hand. These high clean-up costs we have now were really bequeathed to us from a bygone age when we thought the Chesapeake could handle anything we threw at it. But the pollution bill has come due. Ironically, political party factions that speak loudest about fiscal responsibility are unwilling to settle up this old bill. The polluters do not want to pay. Hiring attorneys to discredit scientific findings has been discovered to be less costly than changing how business is conducted in Maryland.

The United States Army Corps of Engineers, a non-partisan, unbiased body of scientists, completed a study revealing that removing sediment from behind the Conowingo Dam will do remarkably little to cleanse the Chesapeake Bay beyond its uppermost reaches. The cost of removing the all the sediment would run three billion dollars, and Big Chicken, and its political advocates and attorneys, want Exelon, the dam’s owner, to foot the whole bill, or pay for any interim dredging costs short of full sediment removal. This makes as much sense as Exelon identifying and charging all polluters upstream of the Conowingo for decades of protecting the Chesapeake from sedimentary contaminants trapped behind the dam.  But none of this this will get my friend Ellen far, far down the Chesapeake back to her former vibrant health, let alone back on the job.

We all know that misdirection is a mainstay of Las Vegas illusionists. It has no place in Annapolis, or Washington, D.C. It will not clean up the Chesapeake Bay. We must all continue to do our part.