It was a great pleasure to travel to Mississippi and finally meet Cyrus Webb, a media personality I have long admired, and a man who has been so supportive and encouraging of The Ben Blackshaw Series from Deadrise, through Nitro Express, to the current release, Tap Rack Bang. Webb is editor in chief of Conversations Magazine, as well an artist, and an author. His inspirational book, Words I Choose To Live By, is touching hearts and minds around the world. 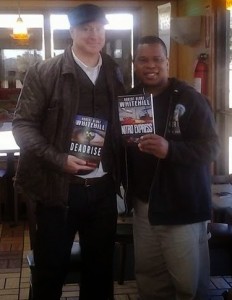 As many of you already know, Cyrus Webb is also an insightful interviewer on radio and television. His audience keeps expanding into new markets all the time, and yet he maintains the highest standards for his programs, asking the best questions without ever descending into salacious gossip. http://www.blogtalkradio.com/conversationslive

My day with Webb included three signings in the Brandon area. It was like jumping headfirst into a very civilized tornado; fast and yet fun. All the readers who attended the events, some of whom were authors in their own right, had great questions about Blackshaw and writing the series, as well as inquiries about the Chesapeake Bay region and Smith Island, Blackshaw’s home. It was a treat to be an ambassador for my small but very special part of this country, especially with Mississippi residents who can claim so much fascinating history of their own.

Between these happy appointments, Cyrus Webb and I chatted on personal matters we had touched upon in our interviews together. We have borne similar heavy losses, found commonality in our family backgrounds, and shared modalities for handling difficult life events, including just staying very busy to keep the phantoms and raw feelings at arm’s length while we heal in the deeper strata of our psyches. I found that as a Quaker, I easily subscribe to his philosophy of making space to breathe no matter how hectic the pace. Using the power of music to soothe the savage breast is another recourse we share, and I am grateful to learn from Webb about Bob Sima, and his transformative melodic messages. (Bob Sima is the subject of a Cyrus Webb interview on www.106LiveRadio.com)

I returned home from Mississippi with an enriched friendship with Cyrus Webb, all the more grateful for his encouragement, and his strong commitment to the written word. I look forward with pleasure to heading back to the Magnolia State soon!