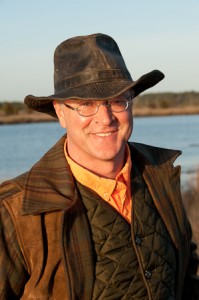 Robert Blake Whitehill was born into a Quaker family in Mardela Springs, just outside Salisbury on Maryland’s Eastern Shore peninsula. The family home lay next to the pond that powered a colonial-era relic, the Barren Creek Mill. He grew up sailing the Chesapeake Bay, and one of her most beautiful tributaries, the Chester River.

After graduating from Westtown School Whitehill stayed in Pennsylvania to earn his B.A. in creative writing at Haverford and Bryn Mawr Colleges. Later he trained as an actor at the Royal Academy of Dramatic Art in London, and at The Neighborhood Playhouse School of the Theatre in New York City. As with David Mamet, exhaustive studies of the best English language drama for the stage and screen transformed an aspiring actor into a passionate writer.

While writing many highly rated episodes of Discovery/Times Channel’s The New Detectives, Daring Capers, and The Bureau, he served as the Vice President of Independent Film Acquisitions for the groundbreaking Centerseat.com, developing and managing their Independent Film Channel.

Movie studio HatLine Productions is optioning the first two books, as well as the third title in the series, Tap Rack Bang, for development into feature films.

Whitehill lives in New Jersey with his wife and son. For a number of years, he has worked with the Montclair Ambulance Unit as an emergency medical technician.

When not sailing, or knocking around the sky in a Cessna 152, Whitehill is a contributing writer to Chesapeake Bay Magazine.

A Letter to My Readers