How the Slave Robert Smalls Won the Civil War

Quakers are known to get these leadings, these powerful calls to witness that, even after thorough vetting with other Friends, will not be quelled by anything short of exorcism by action.  I usually write the Ben Blackshaw series.  Writing the feature script on the life of former slave Robert Smalls was just such a leading, a mission if you like.  I ignored the pull to tell this great man’s story for two entire years suspecting that the Universe had not really meant to entrust such an immense task to the likes of chronically Caucasian me.  God must have butt-dialed me, meaning instead to hit up Will Packer, or Diarra Kilpatrick, or Denzel Washington with that call.

Let me tell you what moved me about this man’s life.  As a young Charleston slave, Smalls was trained as a harbor pilot to bring big ships in through dangerous waters to the shallows by the piers for unloading.  With a new cargo aboard, he would guide the ships safely back out to sea.  The cargoes under Smalls’care would have paid for the freedom of thousands of slaves, but he earned only pennies a day, most of which his master kept. 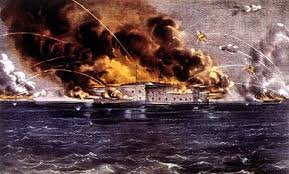 in Charleston Harbor.  Because of his great skill and knowledge of the waters, Smalls was soon assigned as pilot of the CSS Planter, moving Confederate troops and materiel within the complex harbor and its many tributaries.  One night in 1862, the White officers and crew stayed ashore, leaving a 140’ gunship in the care of its docile, obedient slave crew.  At a signal, Robert Smalls gathered his family, and those of his enslaved shipmates, stole the Planter, steamed passed countless unsuspecting gun battery crews ashore, and delivered his prize, and his people, to the Union Navy ships blockading the mouth of the harbor. 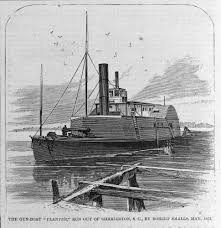 Within weeks, the audacity of this theft, this inexorable call to act against all odds earned Smalls a meeting with President Lincoln and Frederick Douglass—a meeting where Lincoln finally decided to ignore what border states in the war might think or do if he enlisted Black men in the Union Army.  That was it.  The Militia Act of 1862.  Smalls made that happen.  He was 23.  What a seismic dread must have shaken the Confederacy in the face of thousands of new bayonets in the hands of fresh, free, and angry recruits—bayonets all pointing south.

After personally recruiting 5000 Black soldiers for the cause, Smalls went on to be America’s first Black ship captain in the military fighting in 17 engagements on land, and on the water.  He was present aboard his command, the now USS Planter in Charleston Harbor when the Confederate colors were finally struck at Fort Sumter.  After the war, he served in the South Carolina legislature, and in the United States Congress.  He founded America’s first free, compulsory (public) schools.  He bought his former master’s mansion, and when his master’s war-addled widow staggered up to the only address in town she could remember, Smalls took her in and cared for her until her death.

Some have tired of slave narratives.  I have not.  Though I agree that African American history is much richer than bondage, the story of Robert Smalls is different in many ways.  In particular, there is no helpful White agency assisting Smalls’ bid for freedom as there was at the end of Twelve Years a Slave.  Smalls risked death for himself, his crew, and all their families if they were captured or fired upon by Confederate batteries surrounding Charleston Harbor.  This is the story of an escape that succeeded where so many ended in tragedy.  Smalls is a man of our times—a messenger from the past calling us to risk all and rebel against every institutionalized stricture and lesson telling us to do nothing, stay put, and hope others will change the world for us.  I could not wait for someone else to tell of Robert Smalls’ heroism.  I wrote the script Captain Smalls.  Let’s get his long-forgotten story out into the world to show what any of us can accomplish if we refuse to believe we have no power.

To learn more about the script CAPTAIN SMALLS: