In Praise of BAD SAMARITAN 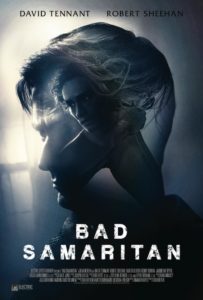 I got to see a fantastic advance screening of director Dean Develin’s latest work. In a season of mega-budget blockbusters based on comic book franchises creeps Bad Samaritan (now playing), a psychological thriller that wrenches the screws down hard and tight on an unsuspecting audience weaned on steroidal spectacle.

Devlin’s Electric Entertainment and fan-funded Legion M chose to back a tremendous cinematic property here.  Devlin directs the way Itzhak Perlman plays his violin.  You need a movie virtuoso to do honors to the Stradivarius

I had to get comfortable on the edge of my seat for nearly two hours as Boyce’s intricate piano-wire plot, action, and dialogue kept me alternating between tectonic anxiety and total empathetic crisis.

David Tennant’s Cale Erendreich is a marvelous deformity, a wonderfully played malignancy in the healthy tissue of society.  When two smalltime thieves discover Erendreich’s fiendish secrets, he tumbles across the razor thin line between high-functioning psychopath and decompensating dybbuk hell bend on self-preservation and annihilating revenge.

It is a pure nightmare to watch Tennant/Erendreich demolish the close friendship between the thieves, which is rendered with mastery and depth beyond the years of Robert Sheehan and Carlito Olivero.  We soul-scream in agony with Sheehan’s Sean Falco at his every failure to be a good Samaritan; like any hero, somehow he carries on in the face of crippling loss and Homeric tragedy.  Olivero marvelously plays Derek Sandoval’s conflict in which he is ensnared between a desire to do right, and the certainty it could get him killed.

If watching a friendship implode is not enough, I gazed in horror as the romance between Sean Falco and his love, Riley Seabrook, played with a rare vulnerable strength by Jacqueline Byers, withers beneath Erendreich’s scorching, deviant brutality.

One of my favorite performances in a film alight with a phosphorus bonfire of talent is Kerry Condon’s portrayal of Katie, a victim hell-bent on surviving.  I was riveted watching how director Devlin, screenwriter Boyce, and Condon wove a cat’s cradle of compliance without acquiescence, and obedience without surrender.  This was deeply complicated work, which Tennant’s underplaying fully supported. 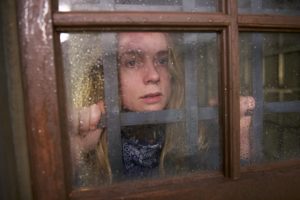 Bad Samaritan is a must-see.  But I recommend you sweat the harrowing journey in good company like I did, at one of Legion M’s many member/investor screening meet-ups around the country.  https://legionm.com/

And Legion M’s fan-funding example is spreading into new areas.  Twenty-five thousand art lovers just banded together to purchase a Picasso for two million dollars.  I have nothing against fine art, but if I want a real kick in the teeth for my investment, some real hellacious fun tachycardia, Legion M and Dean Devlin’s Bad Samaritan would be my jam.