I hope this note finds you well.

Nearly a year after its publication, LUZIFER-Verlag’s German edition of Deadrise Gnadenlose Jagd is still a bestseller in the Amazon.de Kindle Kriminalthriller category at #92, and it charts at a remarkable #6 in  the Militär-Thriller category.   Thank you so much! 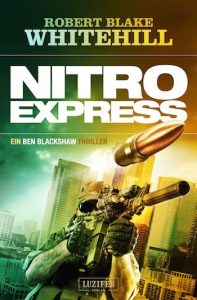 After such a brilliant start, it is a pleasure to announce that LUZIFER-Verlag has published the next entry in the Blackshaw series, entitled Nitro Express. With a gripping cover by Michael Schubert, and a dynamic, thrilling translation by Tina Lohse, Blackshaw’s esteemed German readers can now enlist in their favorite hero’s second mission.  Only days after publication, Nitro Express is charting at #12 in the Militär-Thriller category.  Another bestseller!  Thank you once again!

You will remember that after the first mission in the series, Deadrise Gnadenlose Jagd, Blackshaw had to disappear. Nitro Express begins with the solitary Blackshaw transforming captured gold bullion into works of art in the dark New York basement of an abandoned building.  The plan is to liquidate the art pieces to elite collectors for cash which is then returned to Blackshaw’s struggling neighbors on Smith Island.  But Blackshaw’s former S.E.A.L. commanding officer finds him, and blackmails him into a new deadly mission: tracking and killing a rogue sniper.  The chase goes international with Blackshaw and Knocker Ellis unsure from moment to moment if they are really the hunters or the prey. They soon learn the assassin is directed from the highest offices of the United States Government, and is part of a larger conspiracy to start a war for profit against several countries of South America to take over their lucrative drug cartels.  Discovering the identity of the killer makes Blackshaw’s completion of the mission next to impossible.

I hope you enjoy this exciting new thriller.  LUZIFER-Verlag has done a wonderful job with Nitro Express. I am very proud of this latest edition.

In other news, the feature film development of the Blackshaw feature film franchise continues to move forward.  This is a long process, but when Blackshaw readers can finally become Blackshaw movie-goers the world over, I am extremely confident it will have been worth the wait.  You care very much about the books.  The producers care deeply about the movies.  They want to get them right.