Ben Blackshaw’s old friend Travis Cynter is dead.  Cynter was Blackshaw’s comrade-in-arms in the U.S. Navy SEALs.  He was killed in full tactical gear during a black-ops mission on American soil.  FBI Agents Molly Wilde and Pershing Lowry try to draw Blackshaw into helping them solve Cynter’s murder.  The agents need Blackshaw because the case landed in their laps from an American intelligence agency with overseas interests.  From two previous cases, these Feds have come to appreciate how Blackshaw can work in the shadows, off the books, and be easily disavowed should his investigations implode.

Blackshaw is torn.  He has a longstanding mistrust of doing any kind of clandestine work for government intelligence agencies.  In fact, when patriotism has led him to do the right thing in the past, usually against his better judgement and instincts, his friends and loved ones have suffered; many have died.  Helping Wilde and Lowry always comes at too great a cost.  This unhappy history weighs heavily against Blackshaw’s profound desire to solve the mystery of Travis Cynter’s death.  Should he serve with patriotic duty to an ideal that might not exist, or act with honor to clear the name of his murdered friend?

Against the wishes of LuAnna, Blackshaw’s expectant wife, and contrary to the grim and hard-won advice of his friend Knocker Ellis Hogan, Blackshaw reluctantly launches the investigation with a close study of the murder scene on Dog & Bitch Island near Ocean City, Maryland.  The trio finds the exact spot where Travis Cynter died.  It is LuAnna who discovers a clue which spins the team into a deadly transatlantic chase; she quickly learns that the Feds have not told them the whole truth about Cynter’s final mission.

Thanks to Ellis’s wisdom and wealth, and LuAnna’s independent deductive logic, Blackshaw operates like a small covert agency unto himself.  Along the way, he tangles with an old enemy, discovers an unfinished SEAL mission, and cuts out rot at the highest levels of government, including a scandal that could rally terrorists the world over.  And it is all controlled by the iron hand of a shadowy syndicate called Faction.

There’s something to be said by the way that author Robert Blake Whitehill tells a story, and his Ben Blackshaw series is a great example of that. He’s able to give you action and adventure, keeping you on your toes—but he also gives you the human qualities that all of us can relate to.
Cyrus Webb, Conversations Book Club

The action explodes into a hellfire odyssey of deep state espionage and black ops warfare. In the blink of a mind’s-eye, this Whitehill rocket-launched narrative blasts through the cranial frame, hurtling the reader aboard a genuine “Blackshaw sleigh ride” in the hollow point of a .357 magnum. 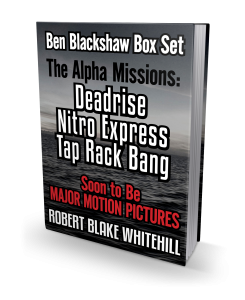